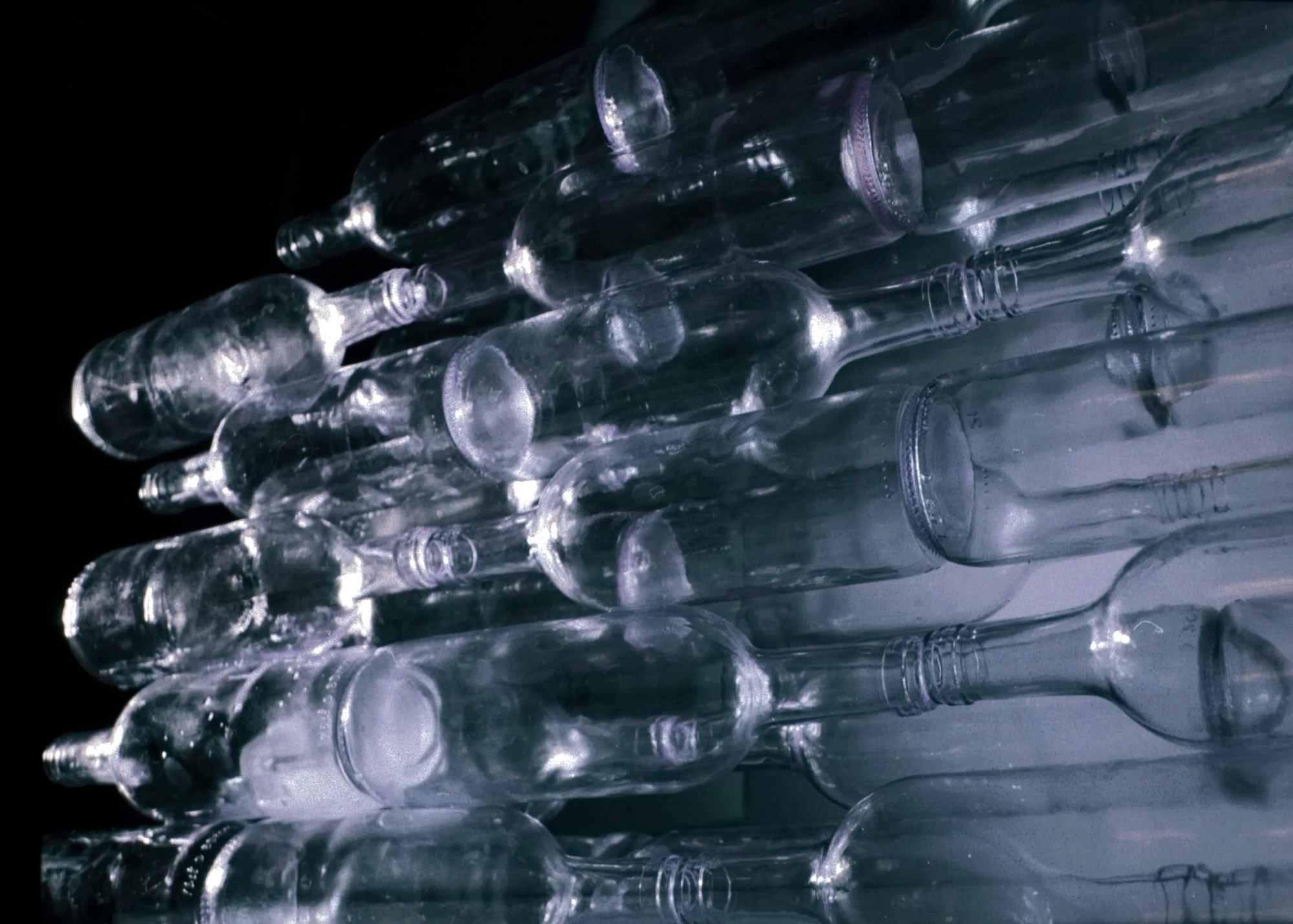 The project proposes a generic spatial "meshwork" for the typical emerging post-fordist service sector corporation. The Ove Arup Partnership serves as case study for the degree to which the system can accommodate specific organisational requirements without losing its coherence. The system is premised on the exponential increase in the communication density within the post-fordist economy. This translates directly into the expansion of meeting room requirements both in overall quantity as well as variety. The systematic creation of variety is set up by means of serial iterations along two principle vectors of transformation: The gradient variation of size from large to small on the one hand and from closed to open on the other hand. Socially the latter transformation implies variant degrees of formality and concentration with respect to the gathering. The spectrum goes from hermetic board meeting (or formal lecture) all the way to an informal gathering after hours in the canteen or in the office itself. This continuum is reflected in the tectonic system whereby the closed volumes on the one end of the building emerge from the gradually warping slab surfaces that are flattened out at the other end of the building. The distribution of difference thus assumes the form of a spatialized morphogenesis. At the dense and closed end of the system the structure of the building performs like a stack of bottles. As these closed rooms separate the loads are more and more taken up by a series of structural curtains. Here the section shows the alternation of meeting bubbles and open office accommodation occupying the space between the bubbles. Then as the bubbles fold the structural curtains screen rather than enclose the respective territories. All along the meshwork these curtains are stretched and deformed in response to the meeting rooms caught in its net. These deformations constitute a form of information that radiates through the mesh announcing the distribution of meeting rooms in both internal and external facades. The project was researching through the following areas of research: structure of the company The client was Arup and the site a city block in Central London. It is a research of new office space – corporate environments. Several divisions and departments form a very complex structure. Grounds The departments are displaced on four programmatic belts occupying the city block. The connections between two departments create sloped grounds. On the slopes hot-desking areas are provided that allow department to extent when necessary. In the pocket under the slope shared supporting programme is placed. The pocket-prototypes vary according to the formal-informal character (opened-closed space) and capacity of users (big- small). Vectors of radial transformation The pocket-prototypes occupy the block following the character of the site. Envelope Structural curtain forms the envelope. The curtain has cuts and twists that allows light to penetrate inside the building. The twists create shading systems and partitions between working spaces. cladding The cladding of the ground is a cut surface that forms stepped surface creating furniture partitions, suspended ceilings and different cladding systems. 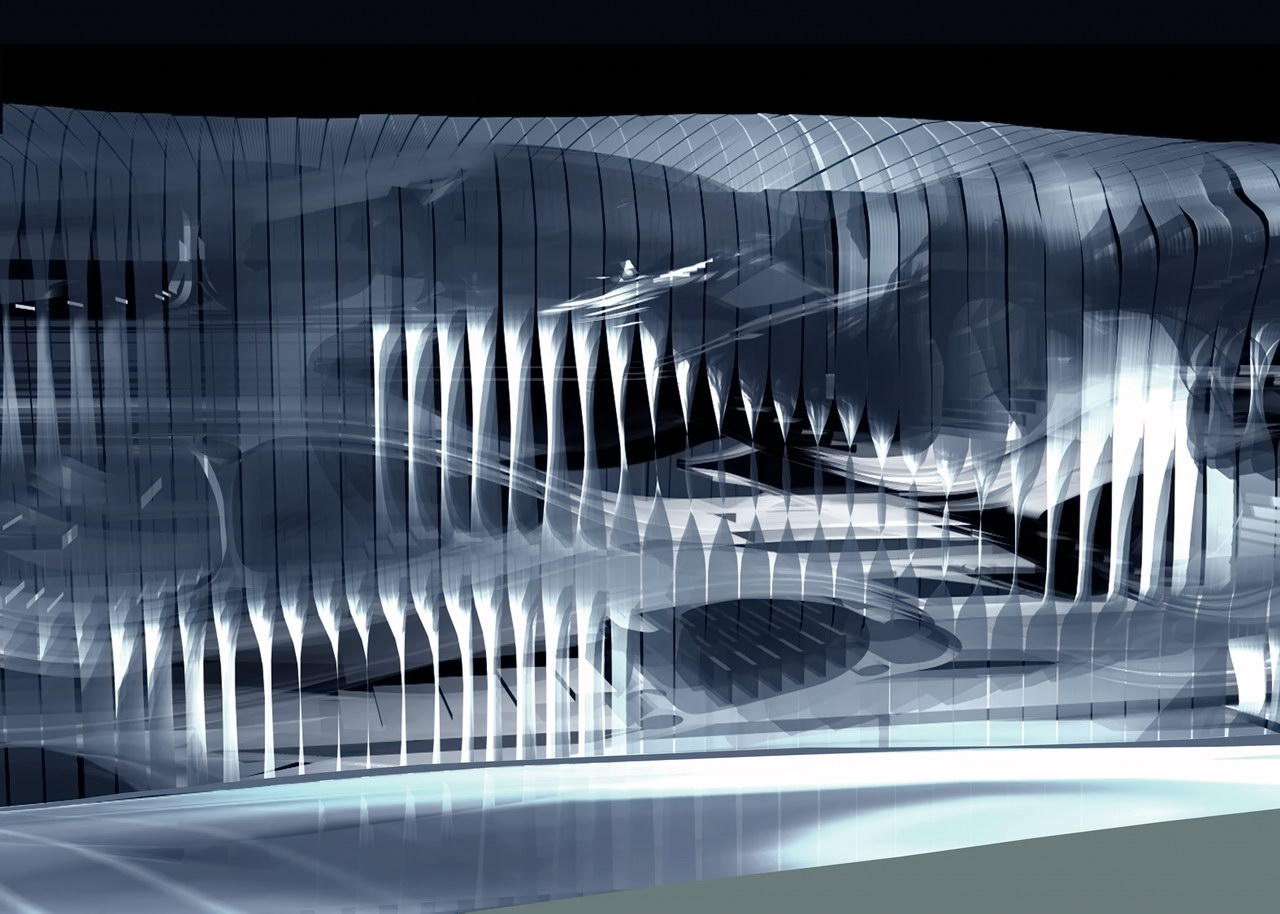 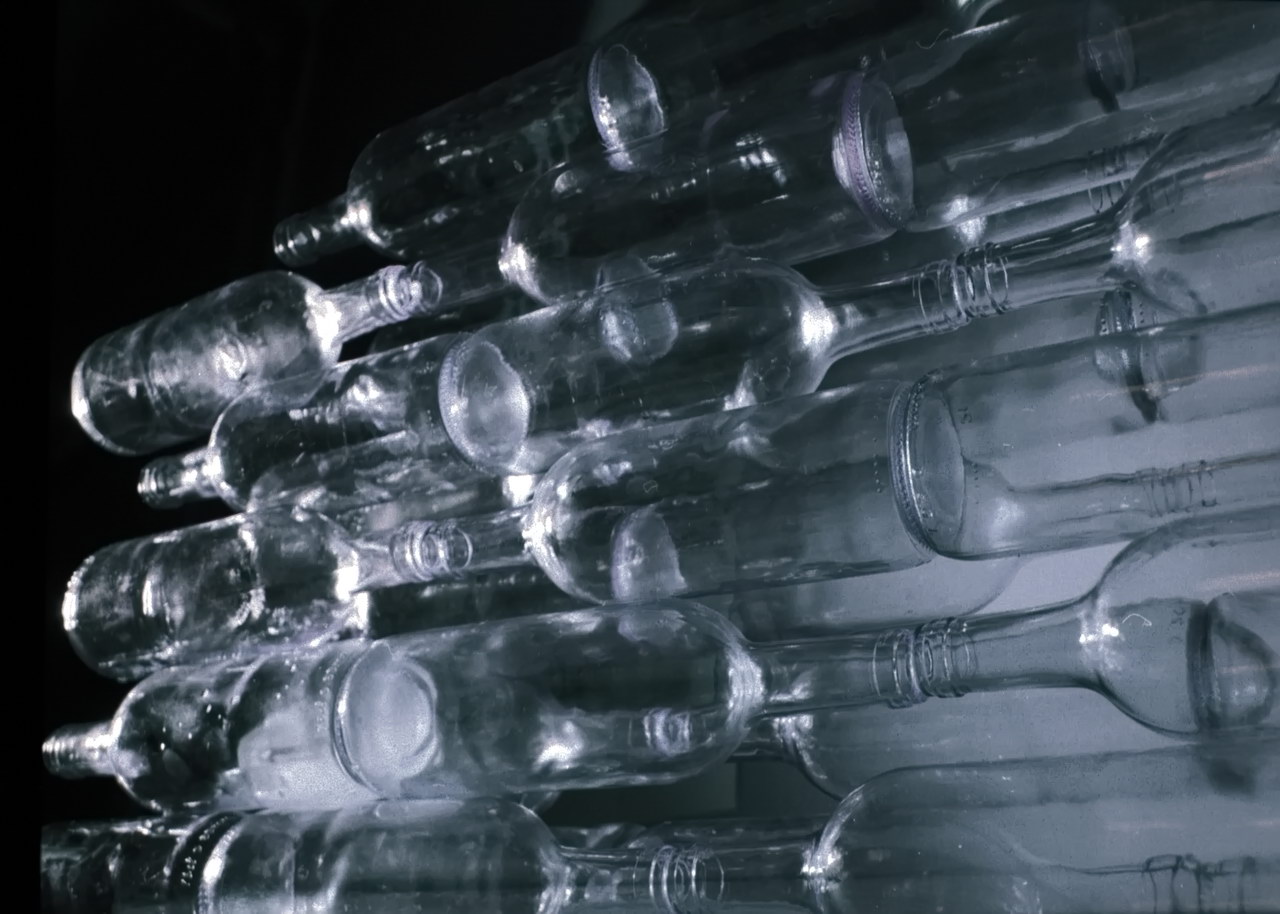 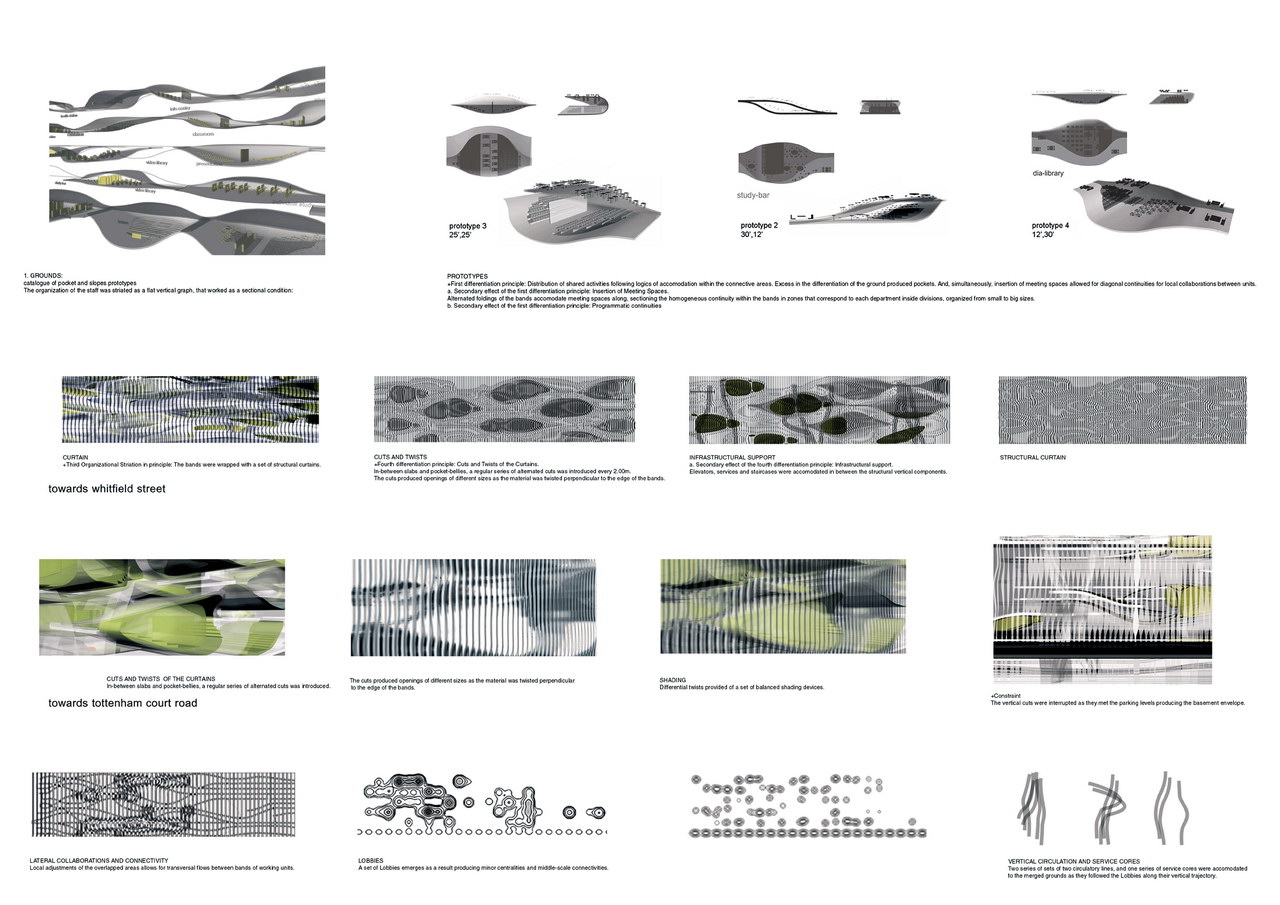 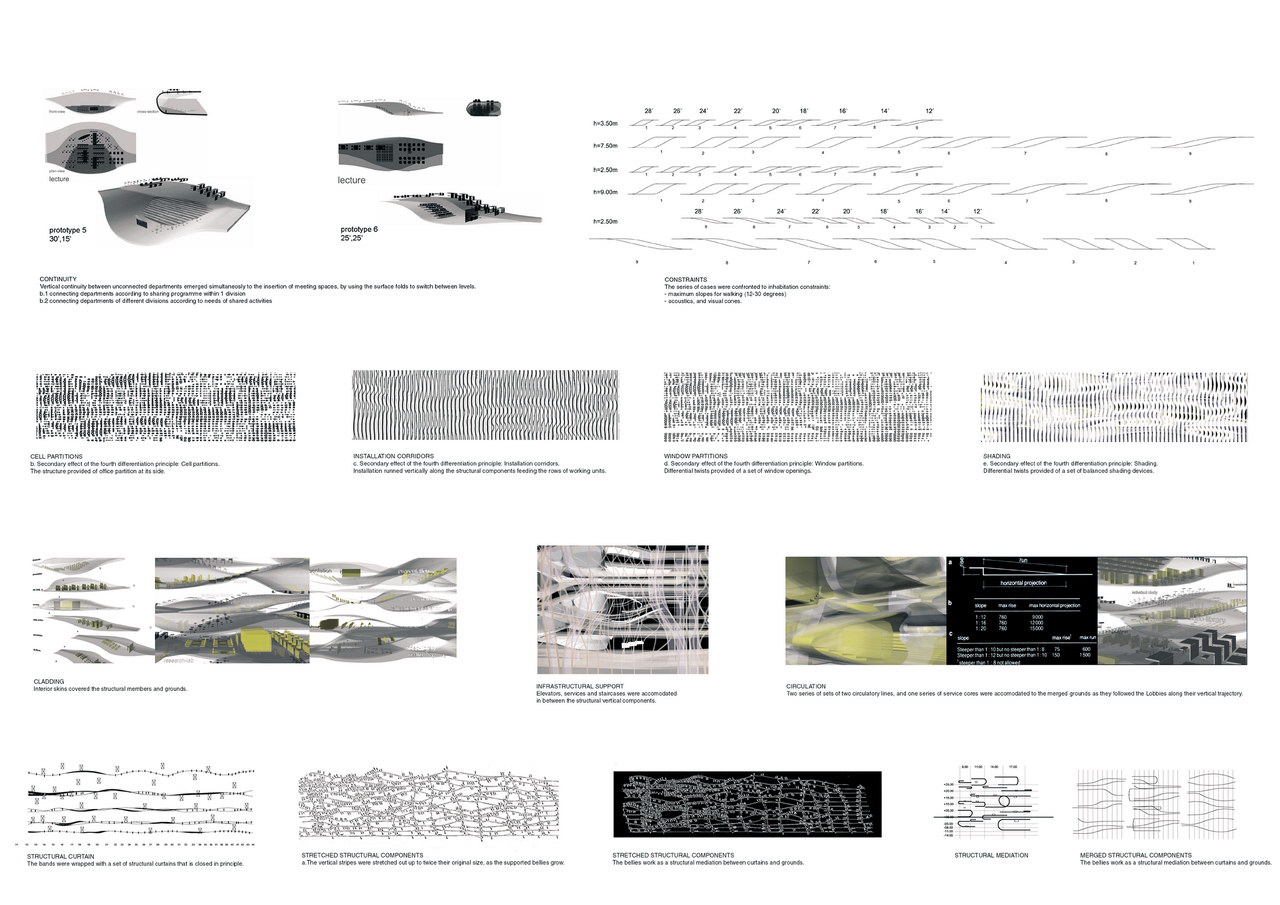 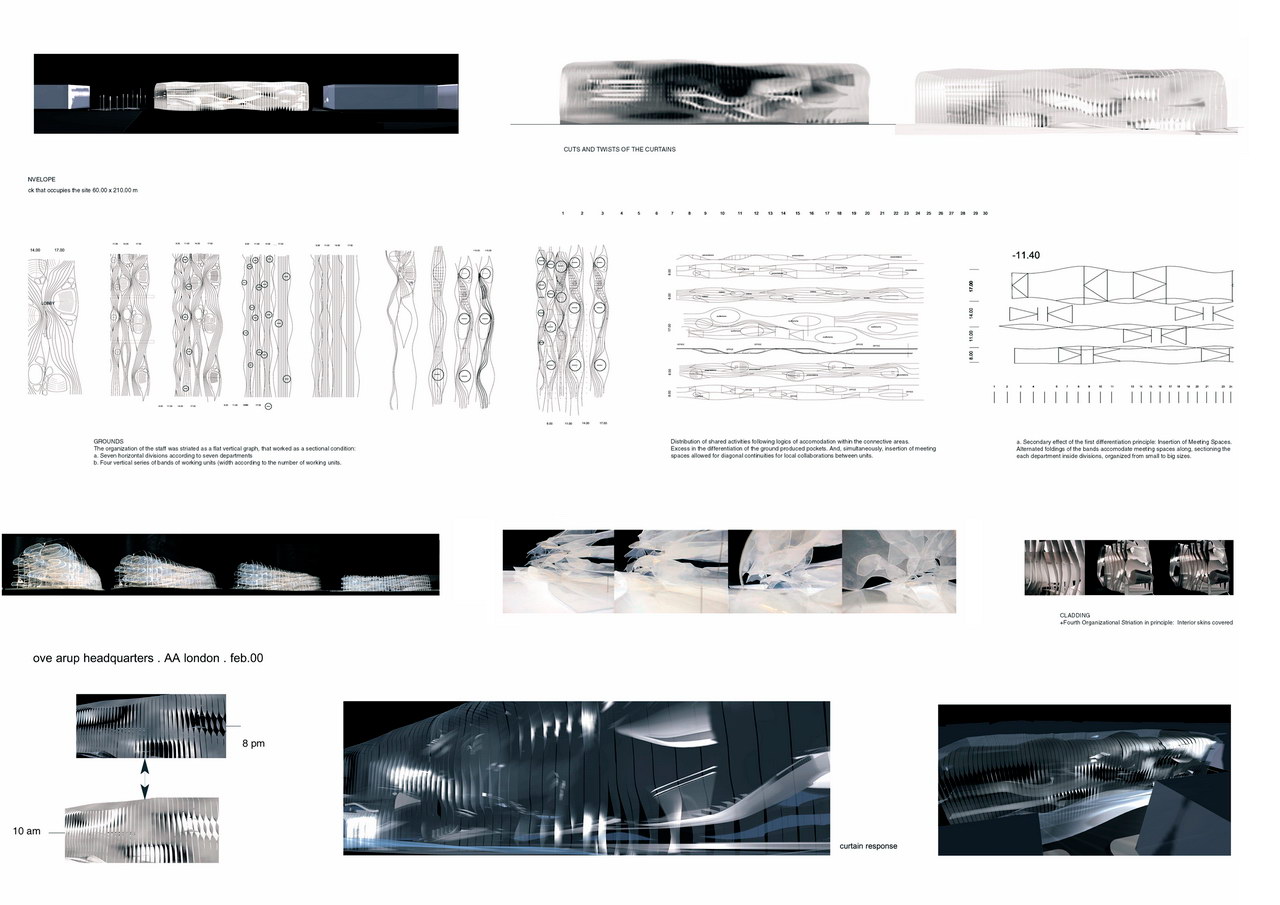 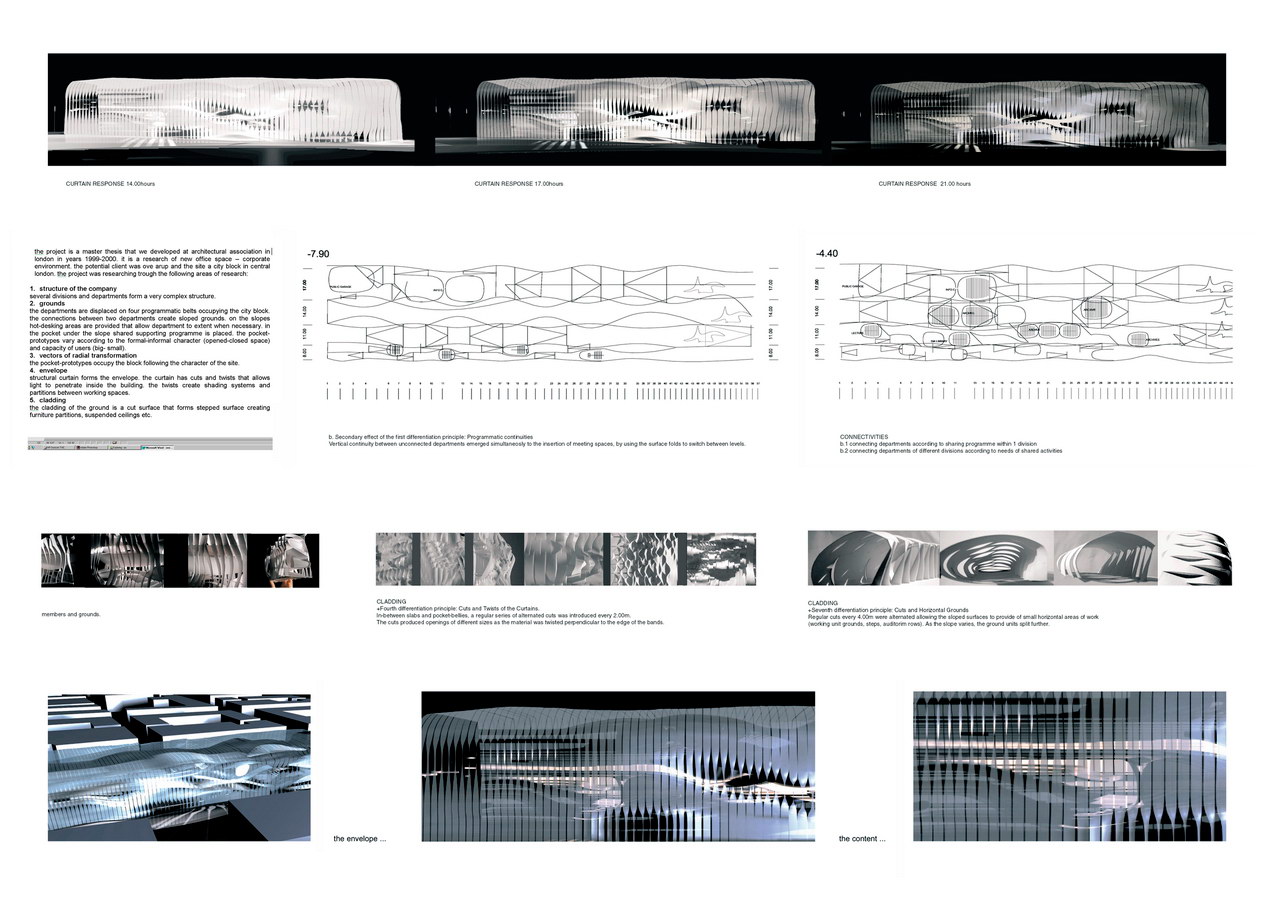