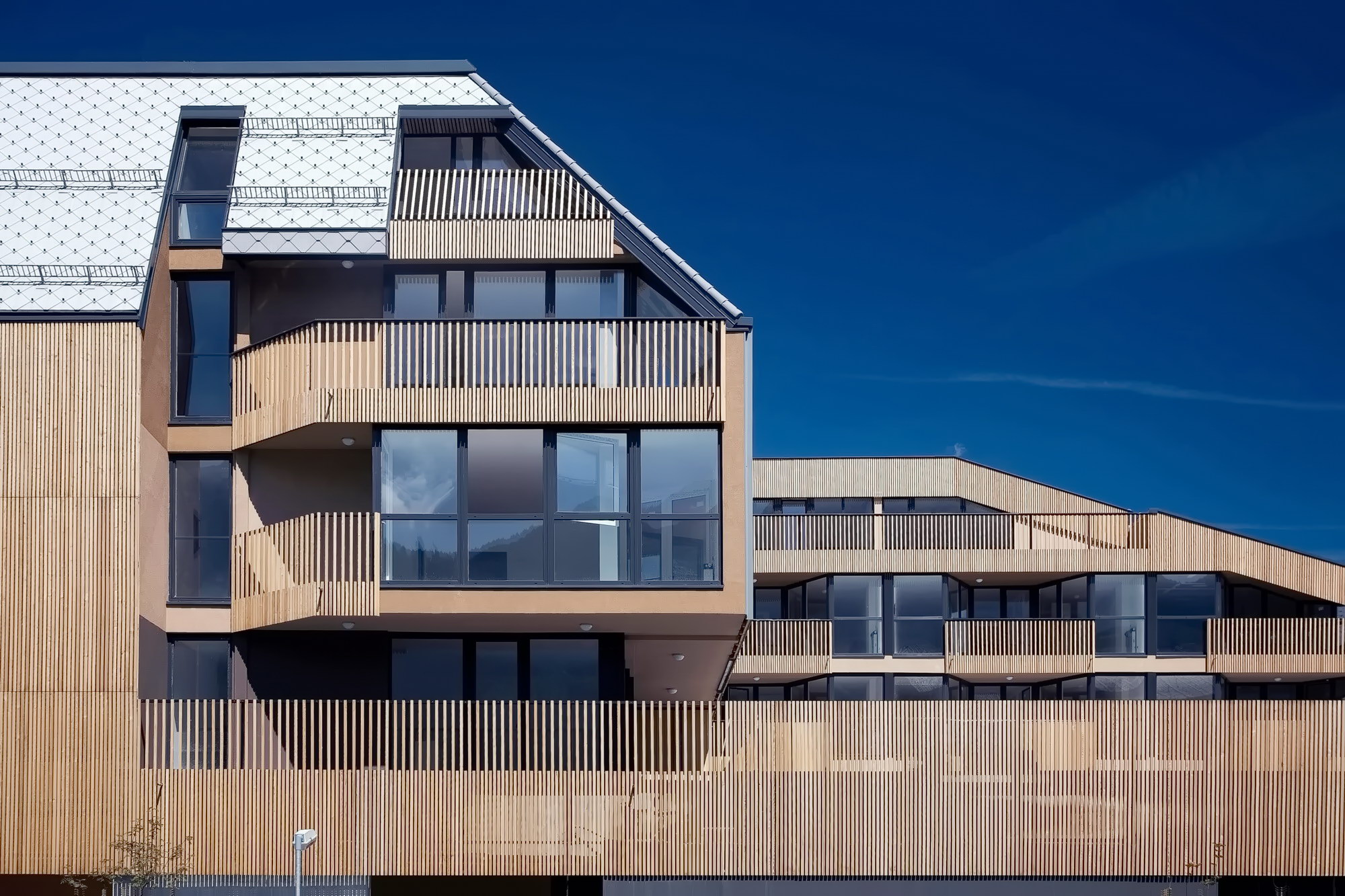 The initial task from the client was to build a new shopping mall on the plot of the existing one. Furthermore the new project proposed the use of the roof as an additional volume-new ski hotel apartments of different sizes. The wooden mass is located centrally in the village of Bohinjska Bistrica in the alpine part of Bohinj area. The village has beautiful views towards the mountains but was fullfiled in the 60-is when a textile factory set low cost housing blocks all around the area. The textile factory was later closed down and the plot was then later occupied by the old shopping mall and today the new one. The side views are therefore not very nice. The organization of the housing and the envelope of the hotel apartments open towards mountain views and the sun. Therefore the front, wooden facade is mostly transparent with panoramic windows. The side facade is closed - the windows open towards the balcony that is cut into the volume. There are also views out to the mountains from the side windows. The stepped volume of the building follows the silhouette of the surrounding landscape. On top of the shopping mall, hotel apartments are set in the form of stepped L-volume. From the west there can be strong wind and snow, here the facade is opened only towards enclosed balconies and its material is grey slate - it is designed as a vertical roof. The L-shape volume encloses an inner communal garden which is on the roof of the shopping mall. The front and the courtyard facade is open, made of wooden verticals with different rhythm. Local larch and diagonal patterned slates are both used, these are traditional materials used for roofing and facades in this area. The play of transparency formed by the wooden verticals that form the balcony fences and facade panels characterizes the north and south parts of the building. On the east and west, pitched rhomboid-textured roof interpolates into vertical surfaces that protect the hotel apartments from snow and wind. The shopping mall facade is a combination of steel and glass panels. The concept of the structure is made flexible, since the only structural walls in the building are used to create the shell of each apartment. All other inner walls are non-structural, giving greater flexibility to the space. The roof is a combination of pitched and flat roof in order to hide all the installation verticals such as chimneys, ventilation and external air-conditioning. 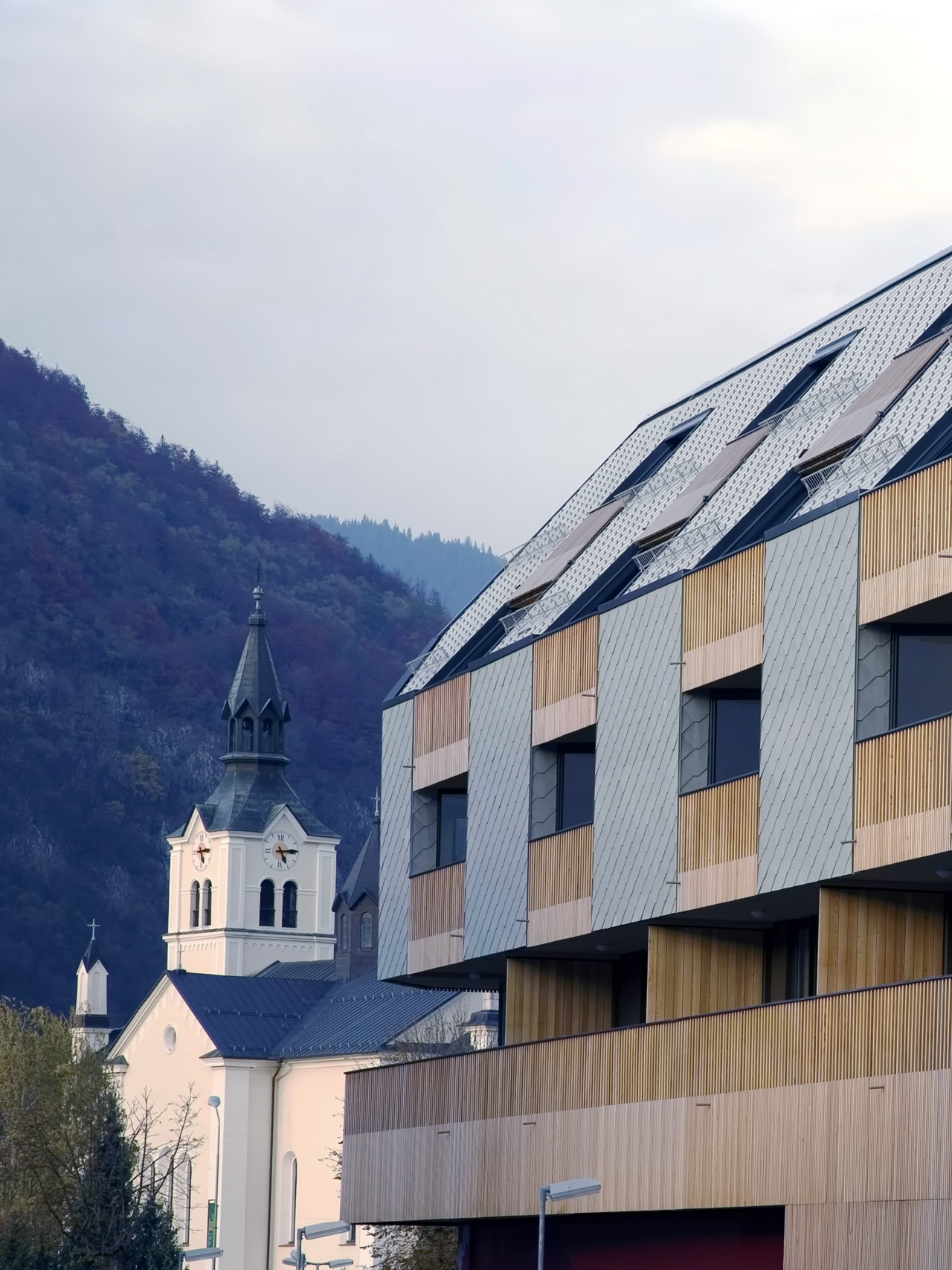 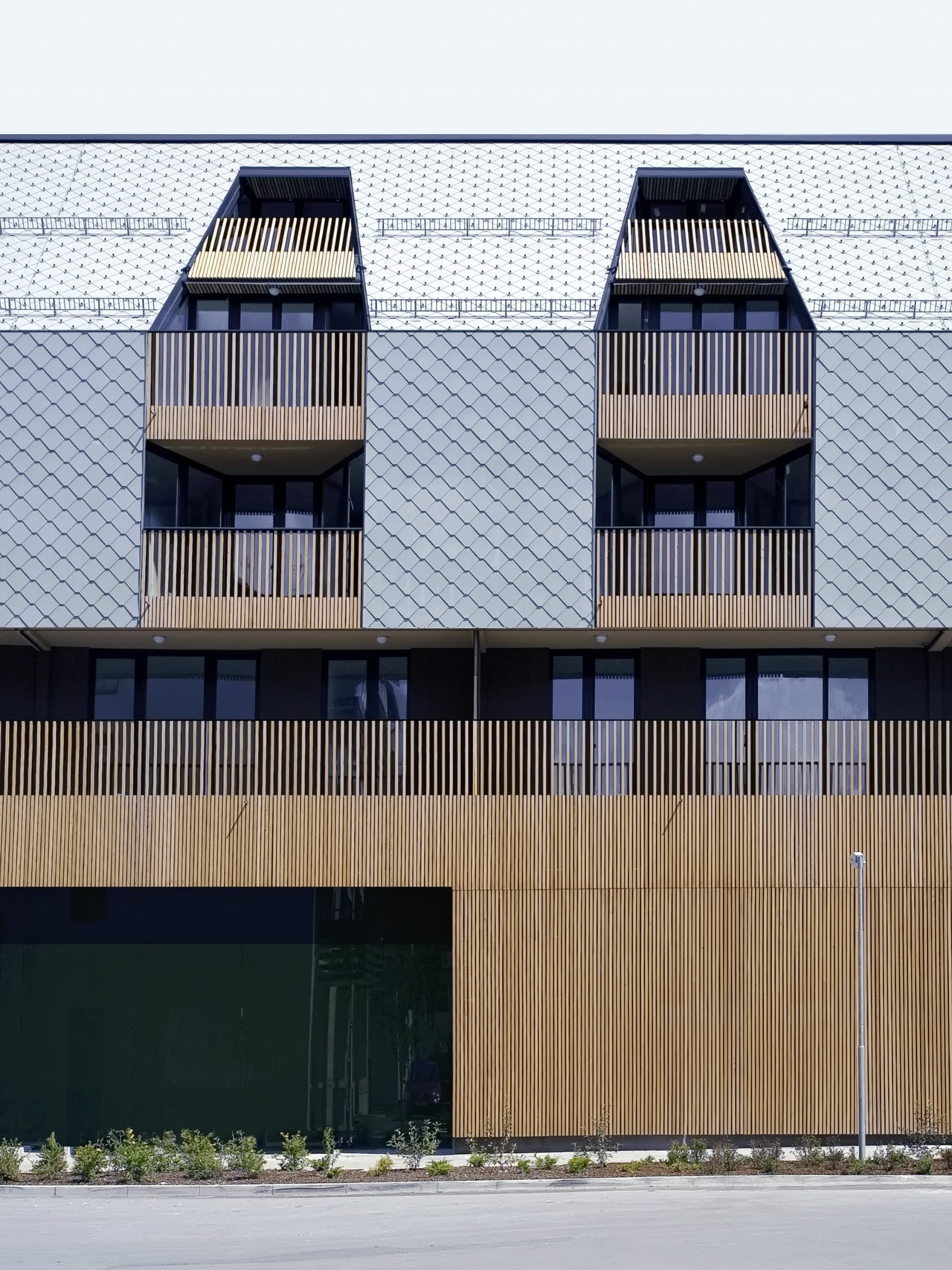 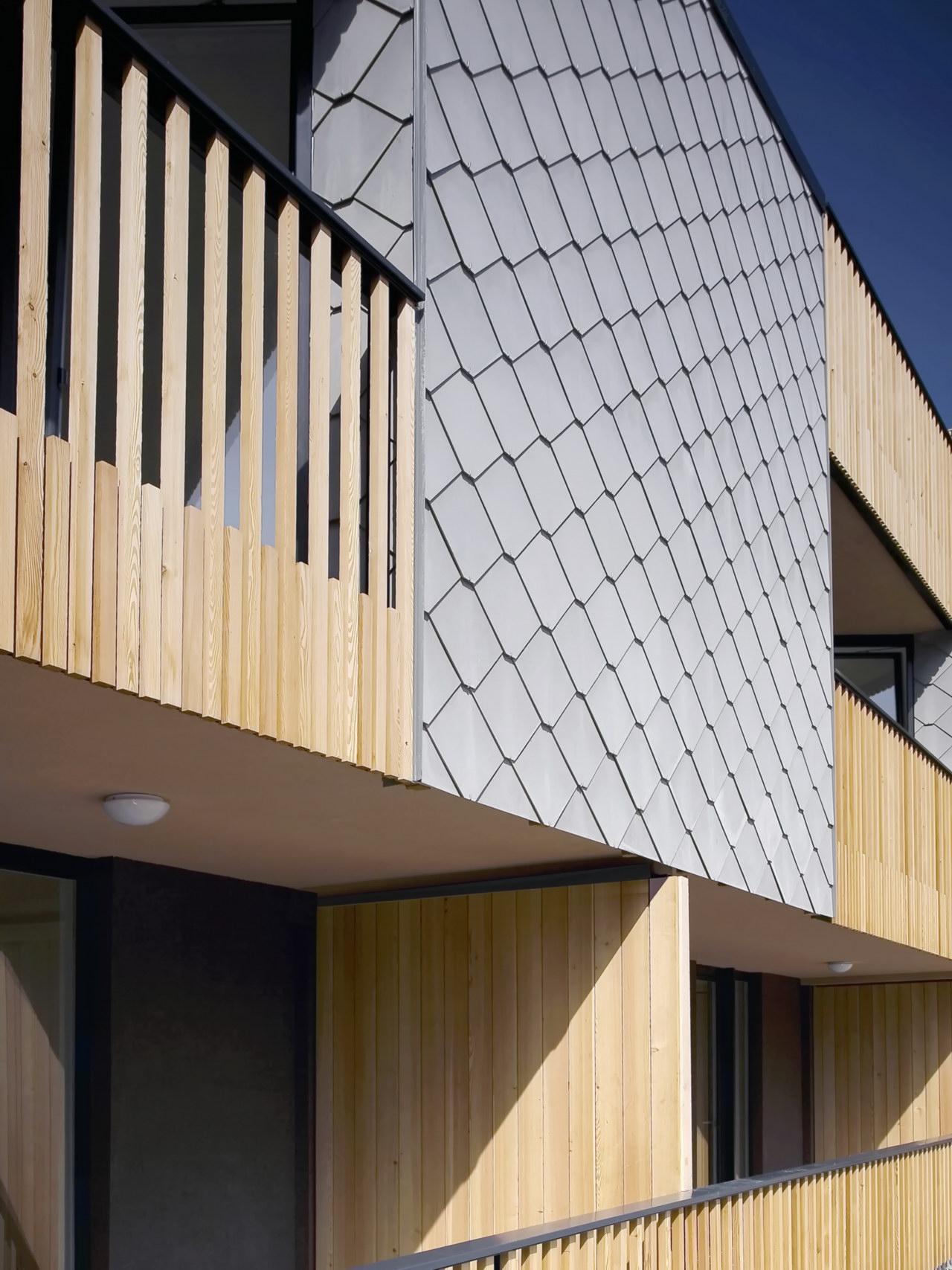 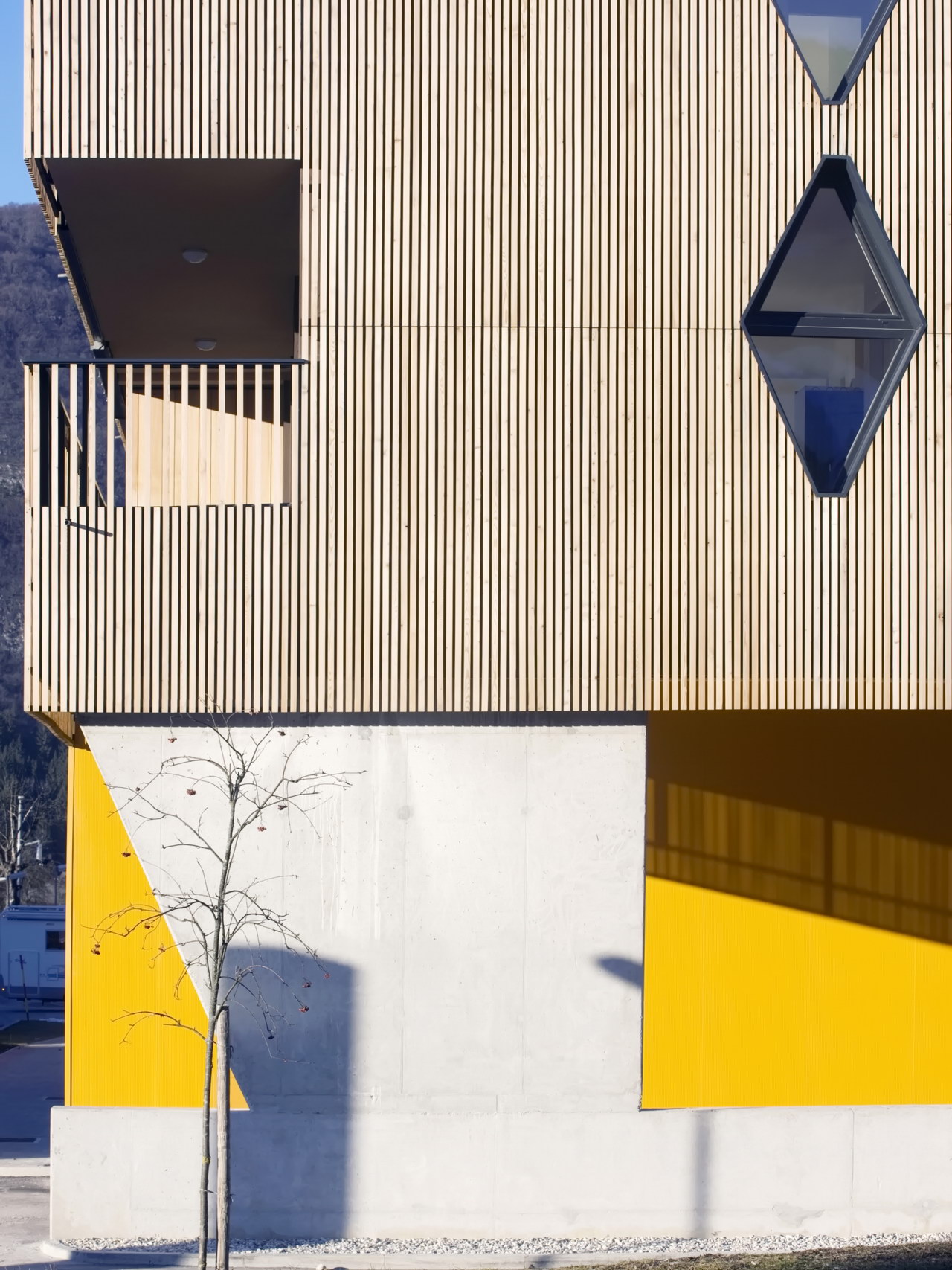 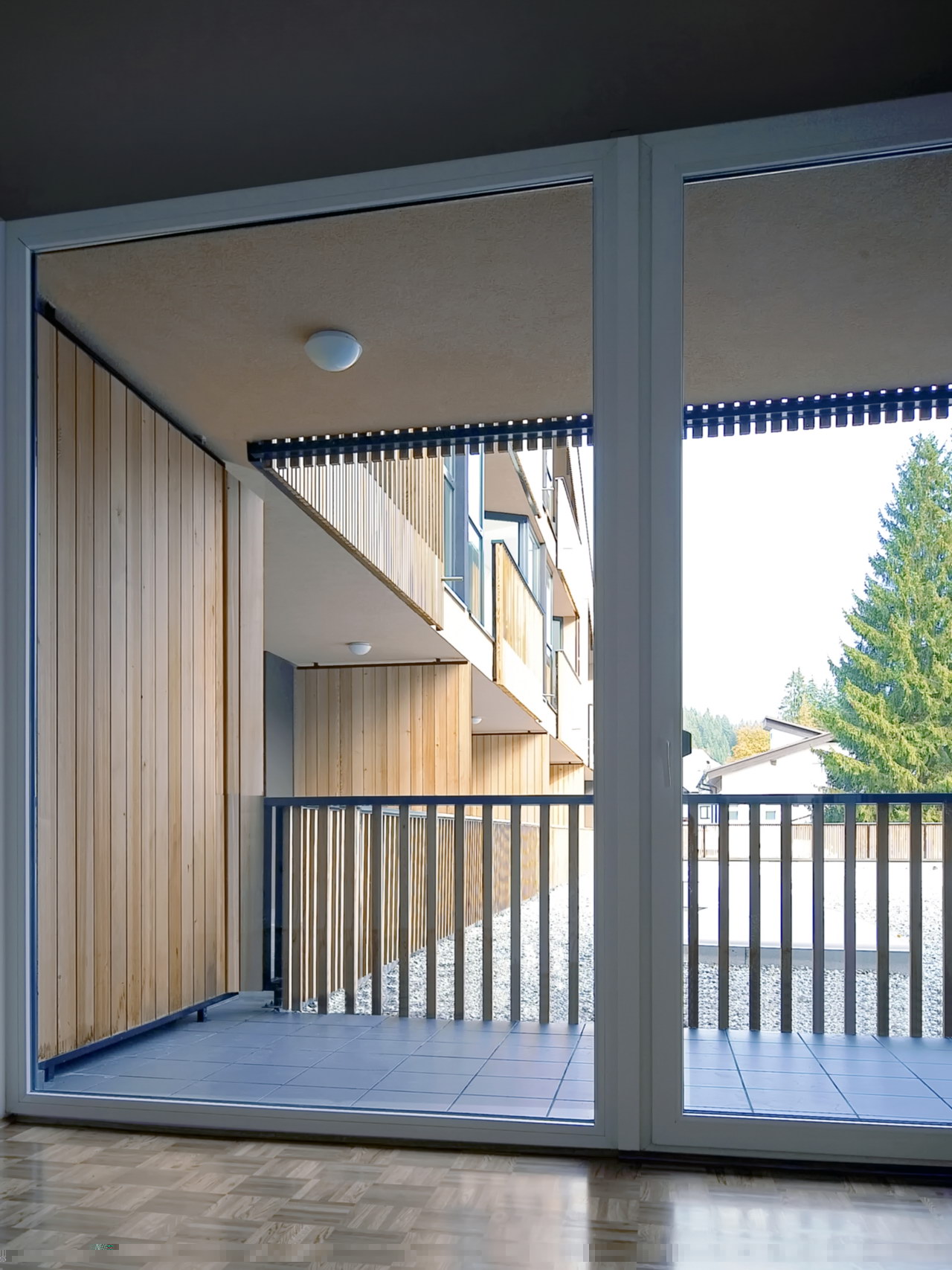 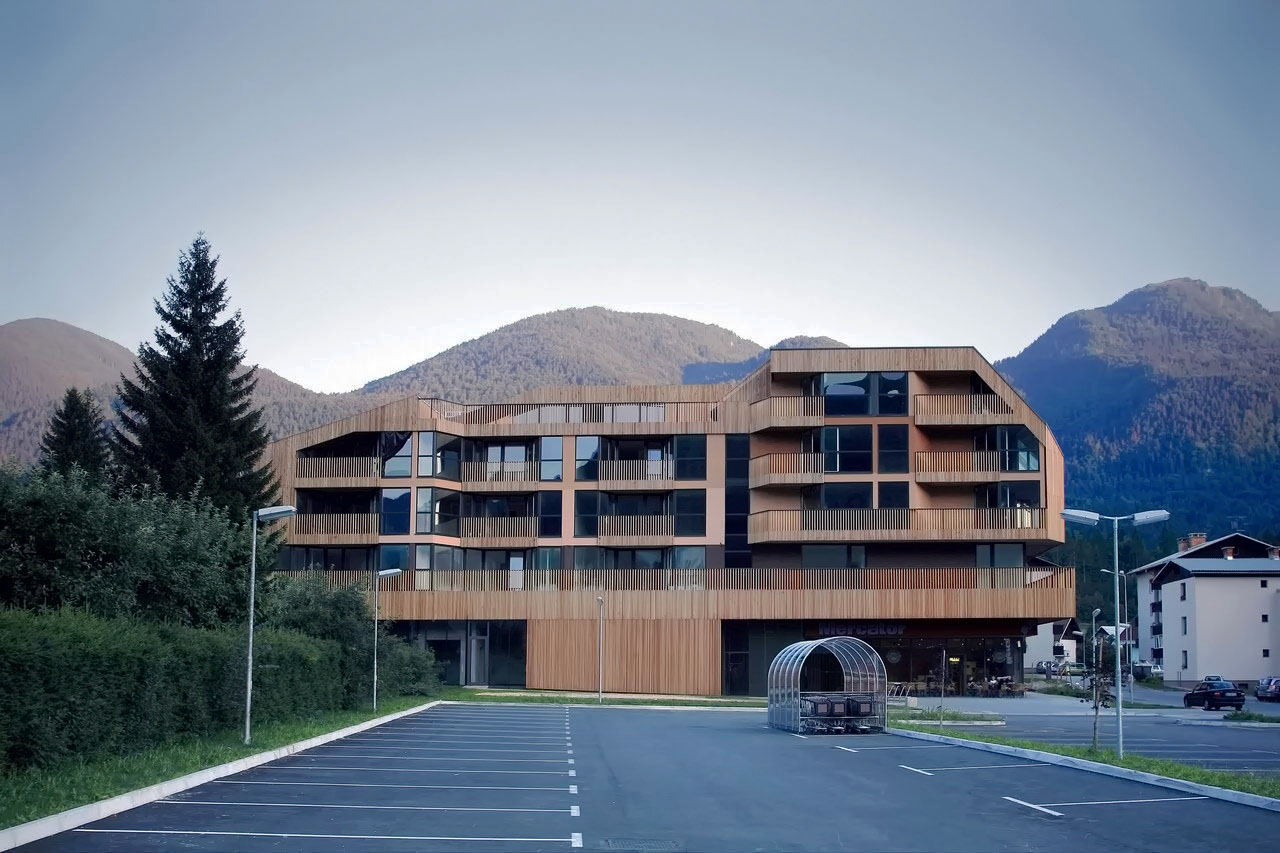 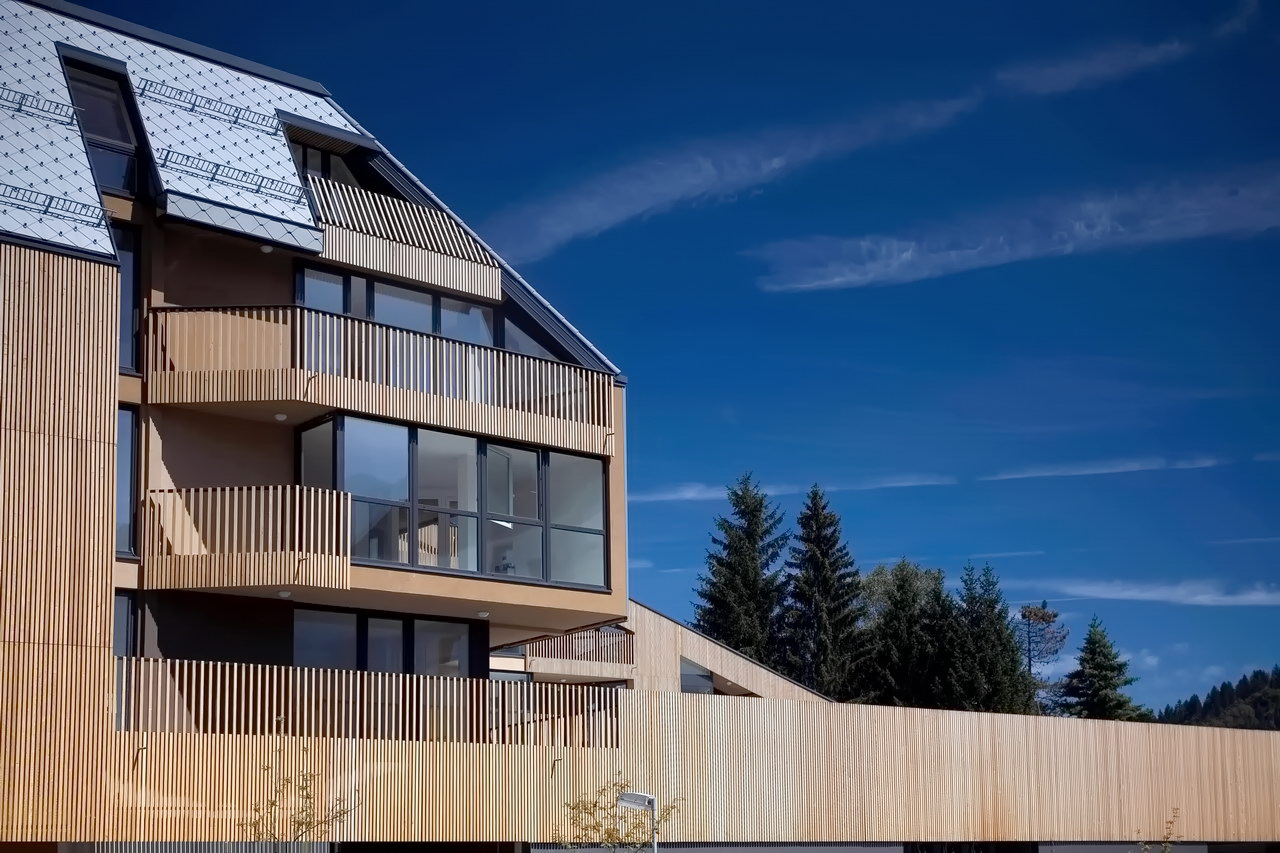 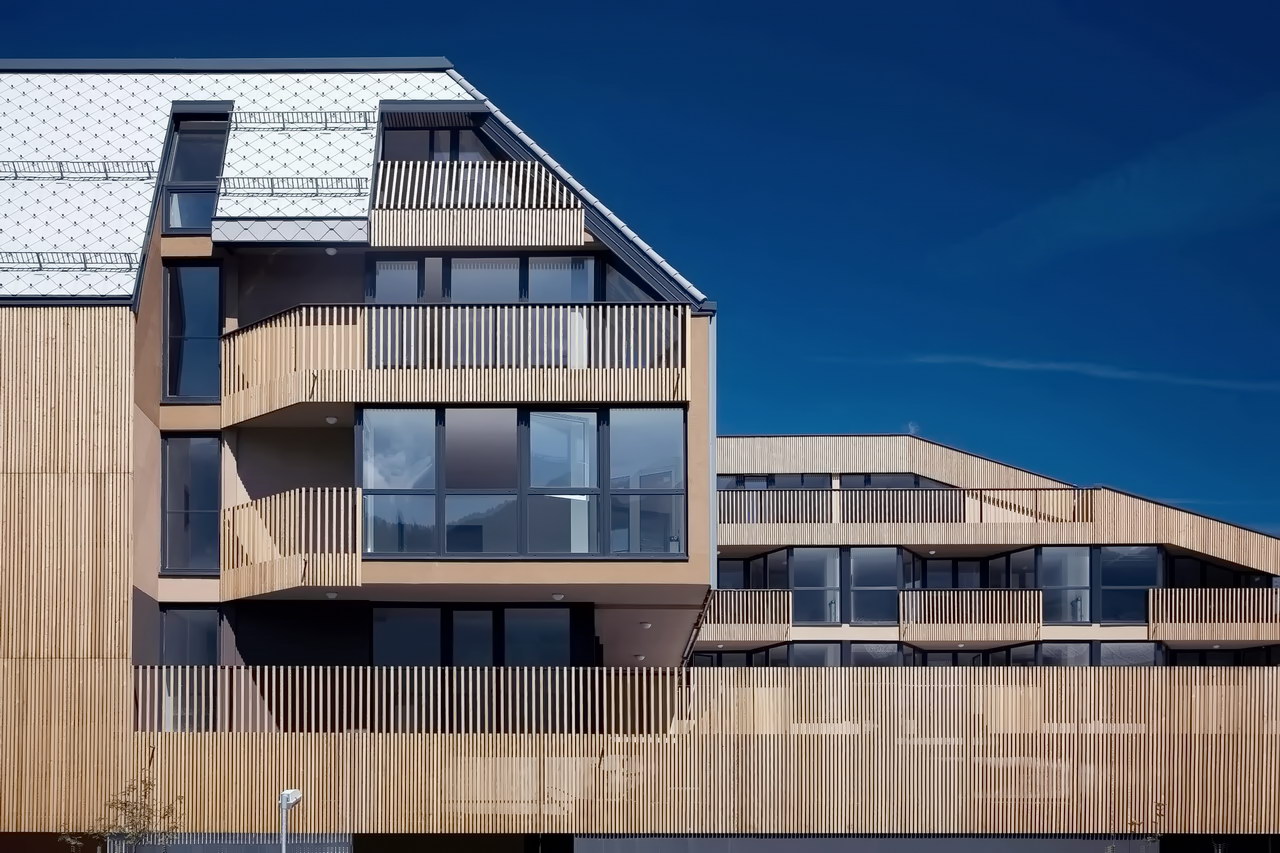 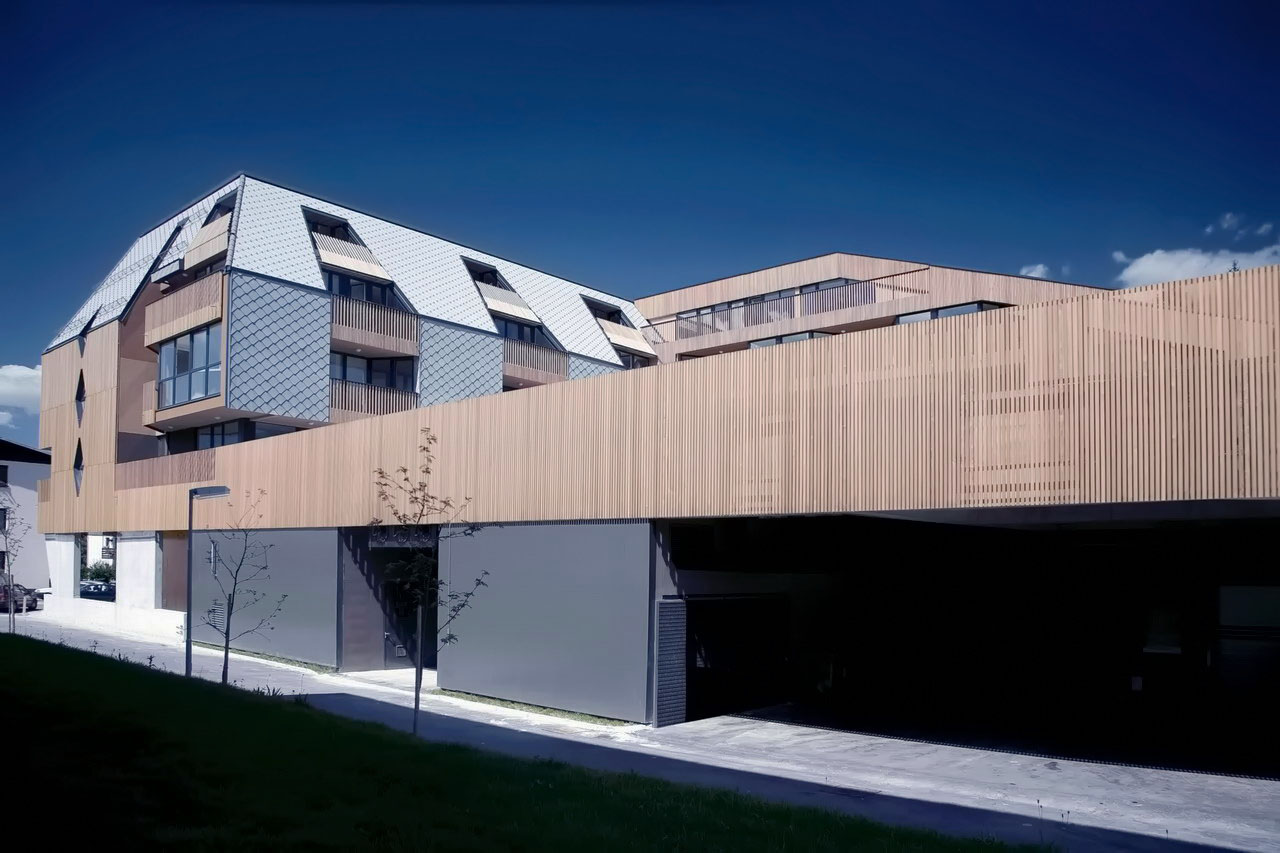 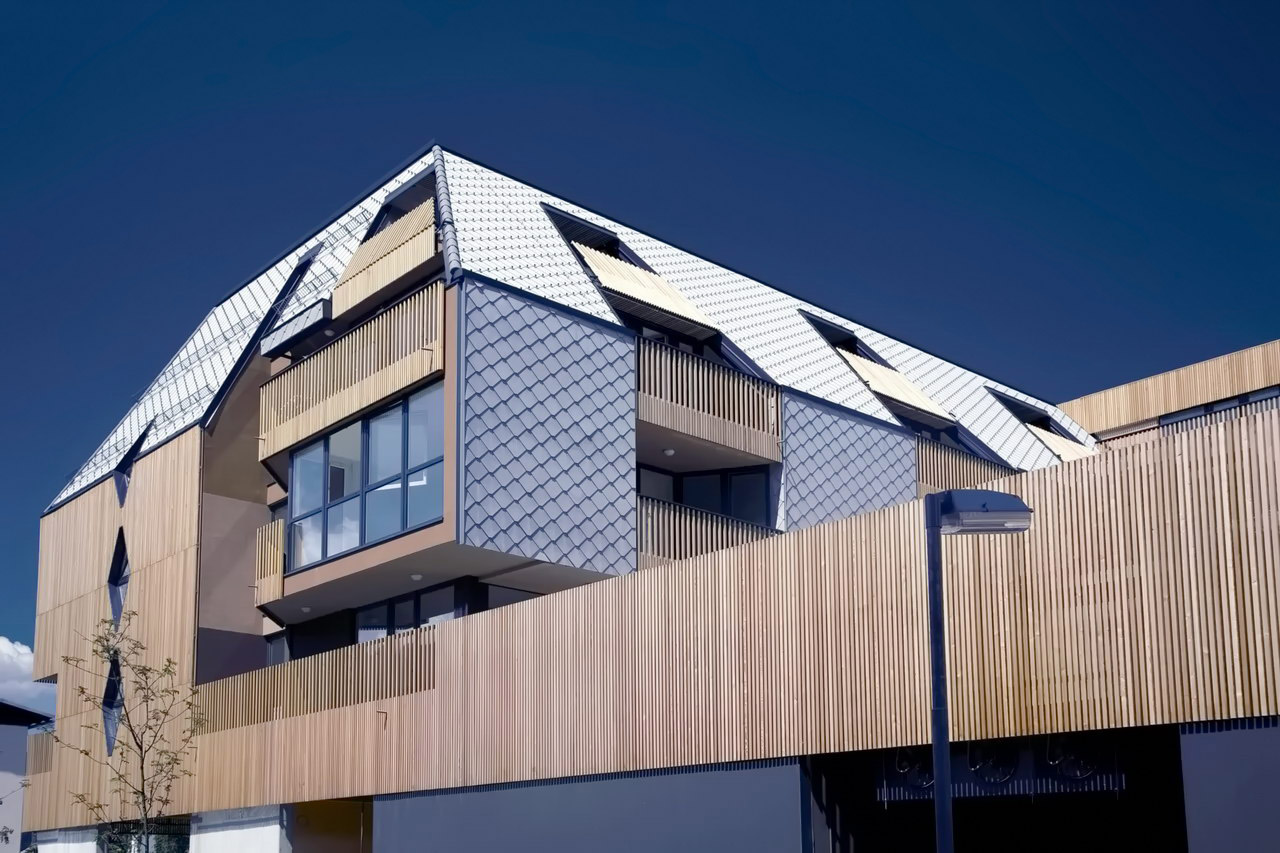 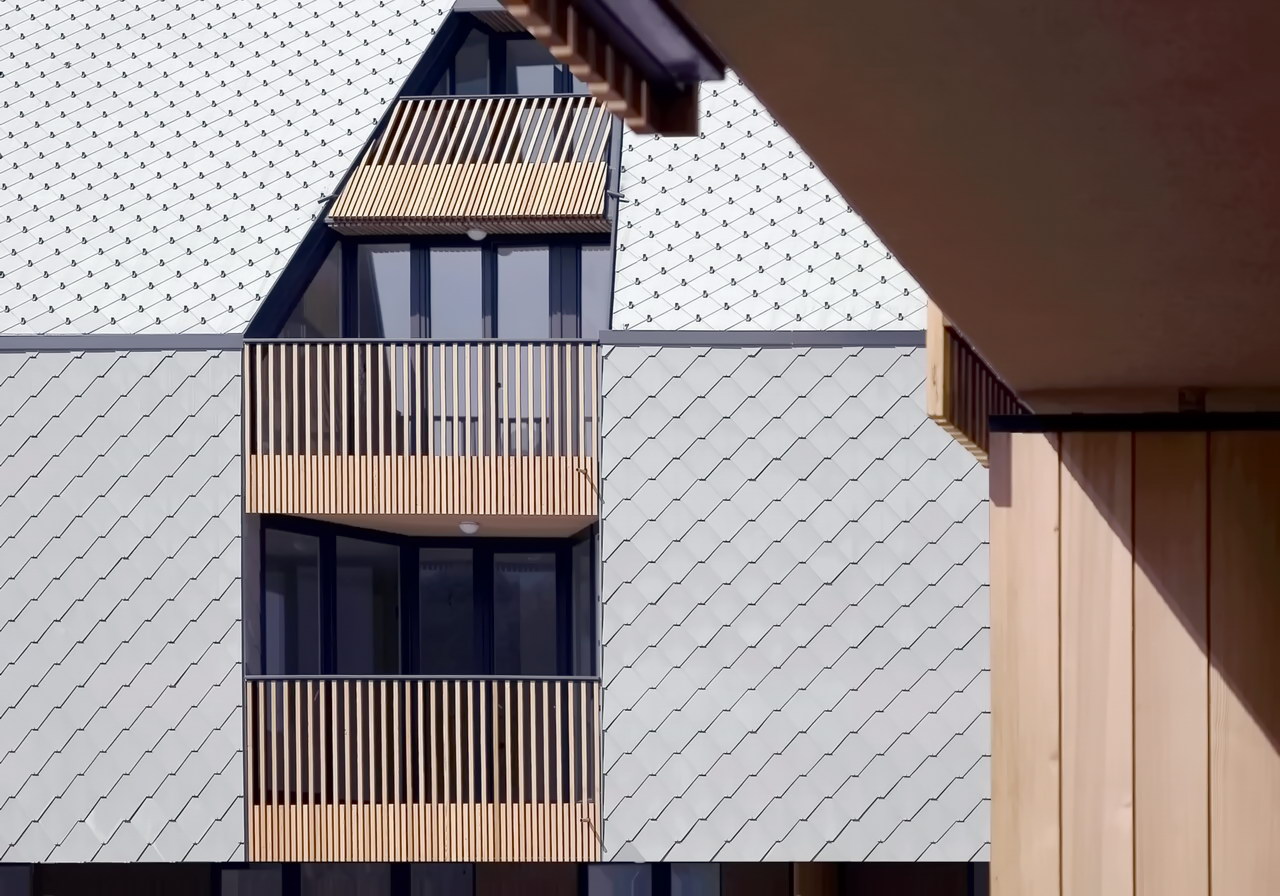 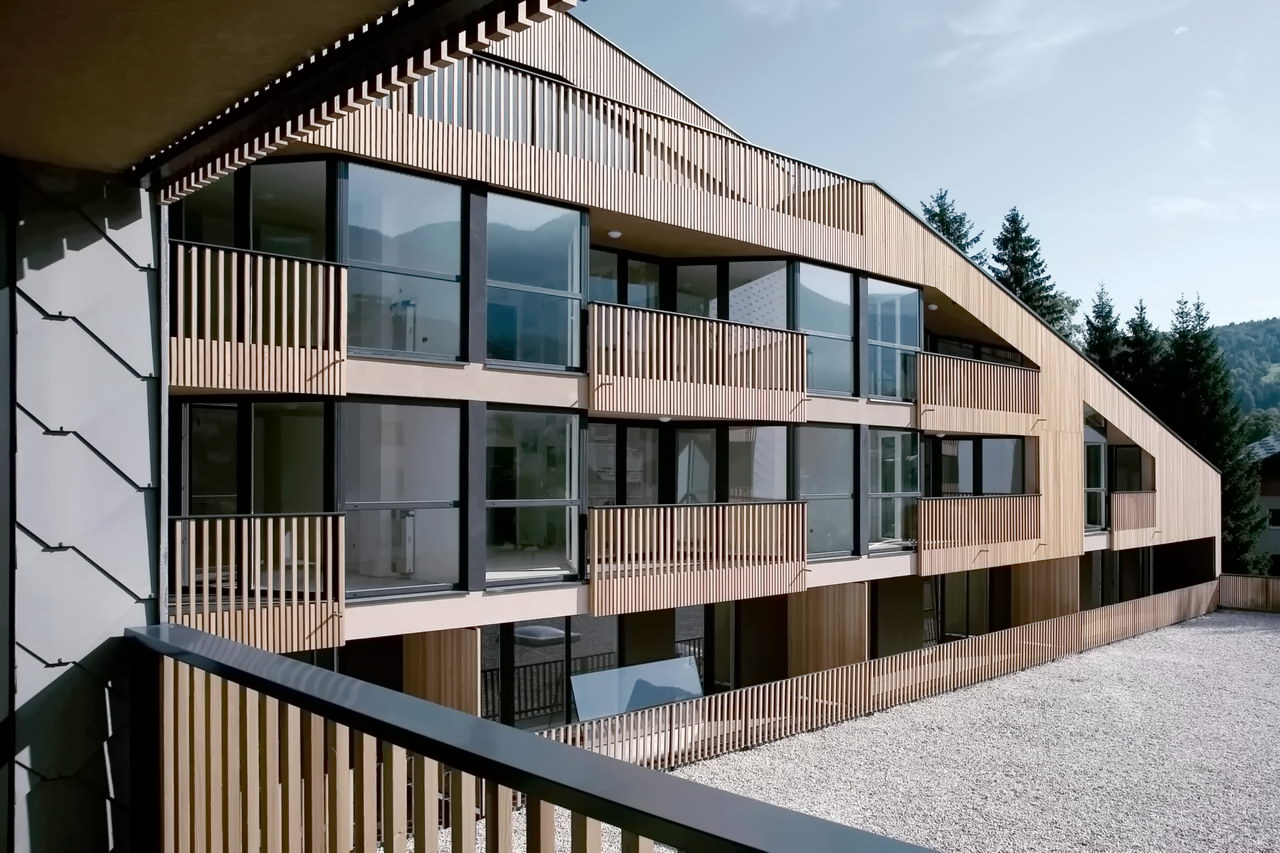 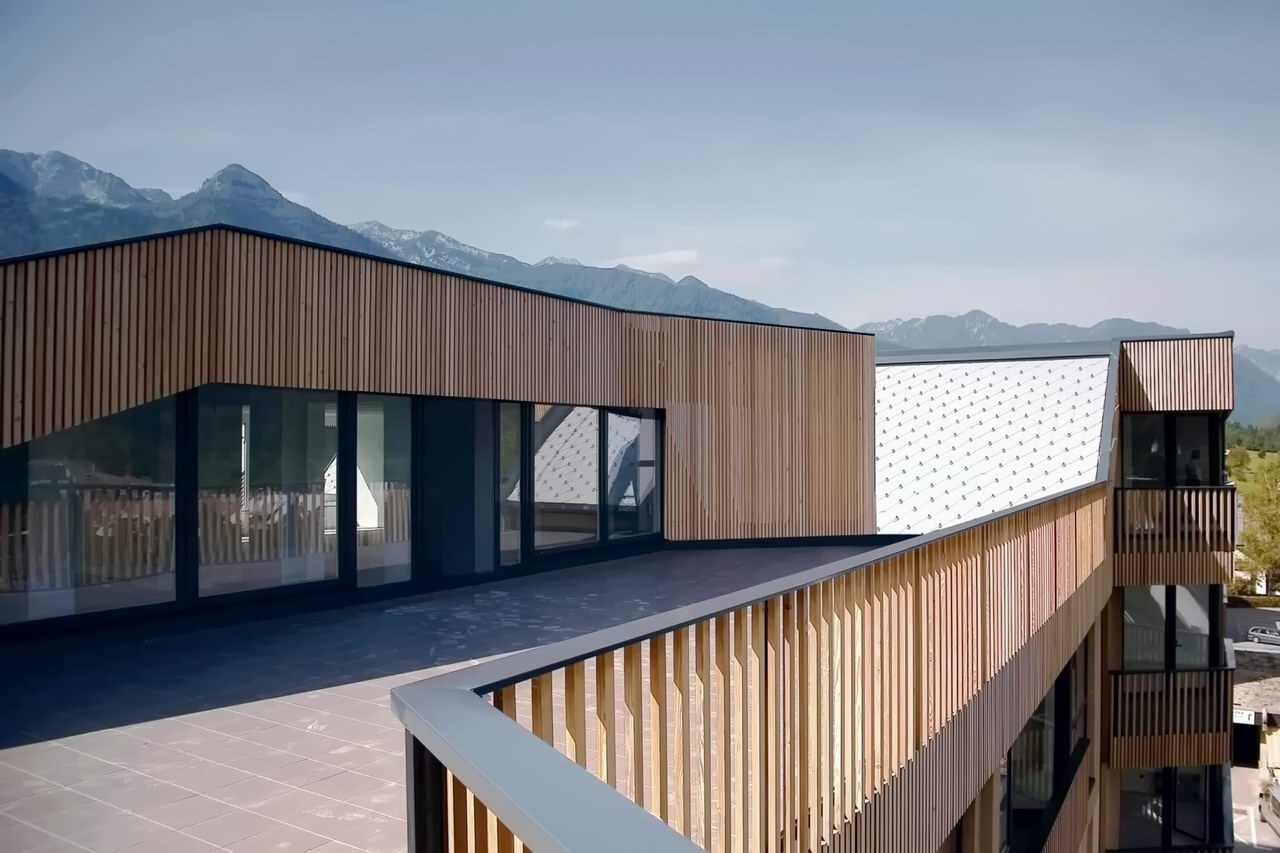 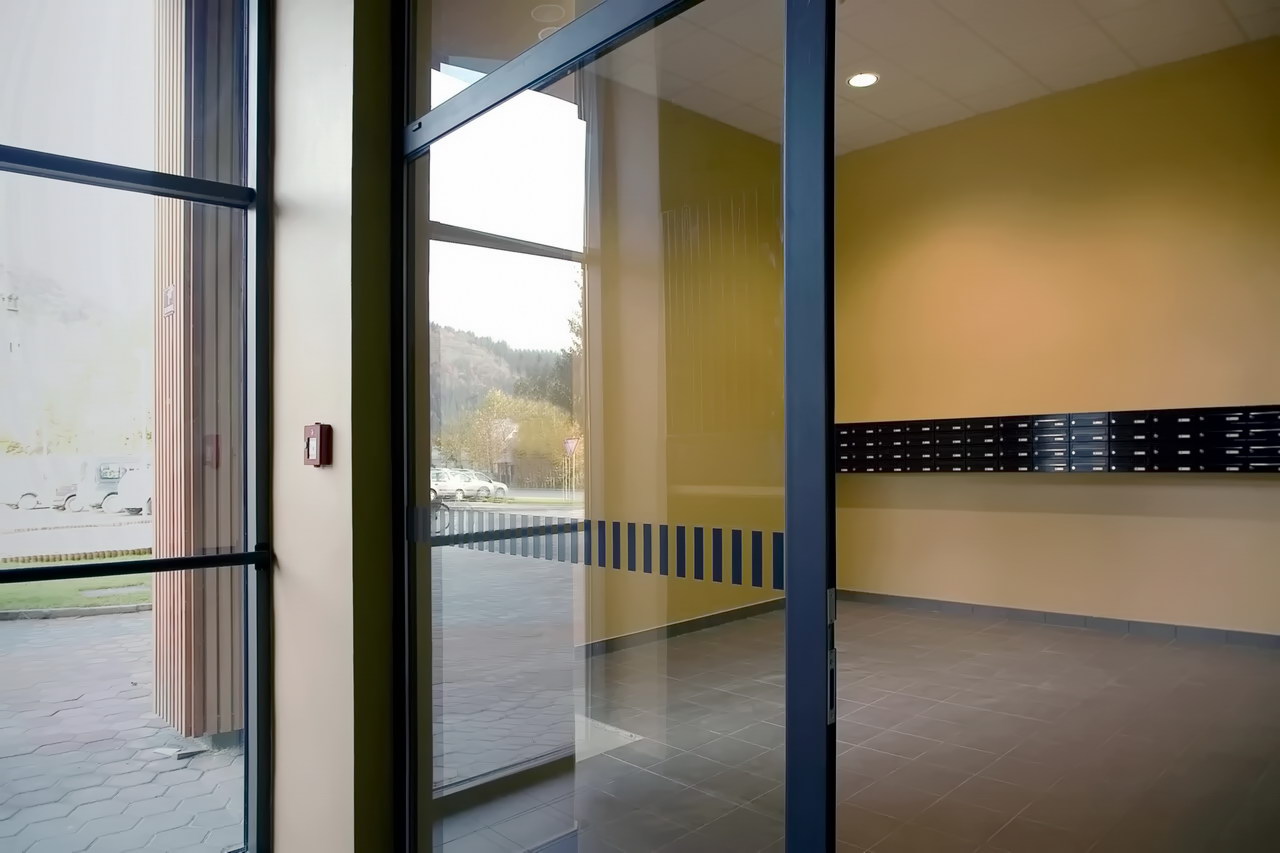 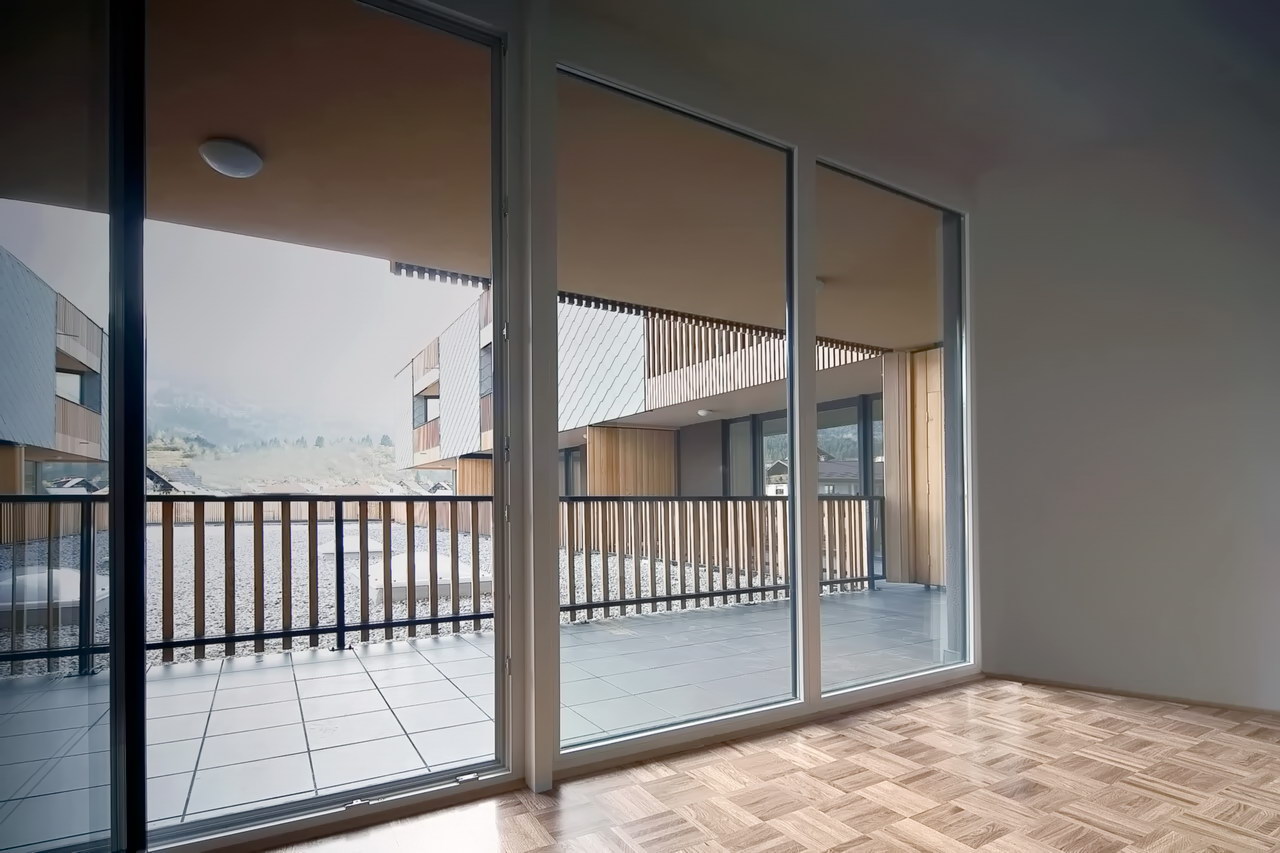 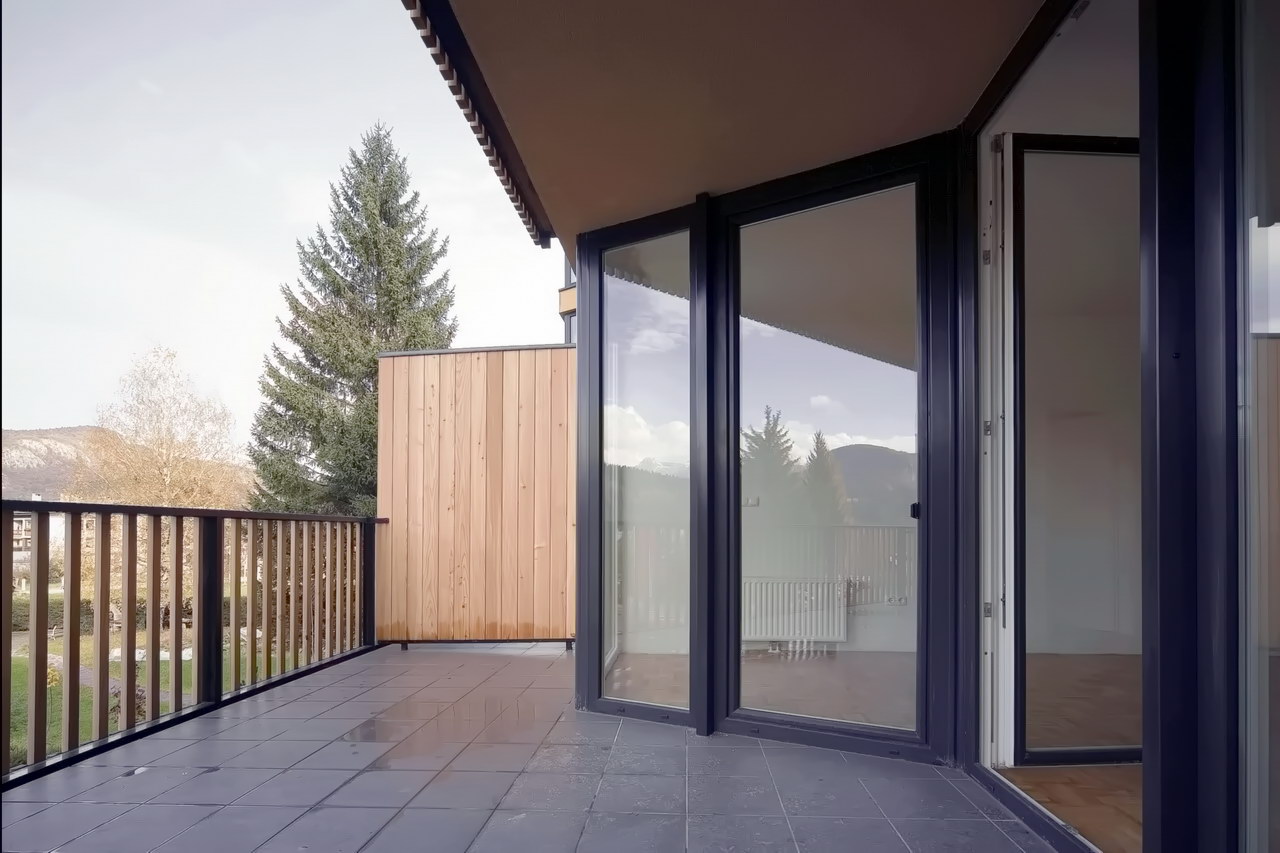 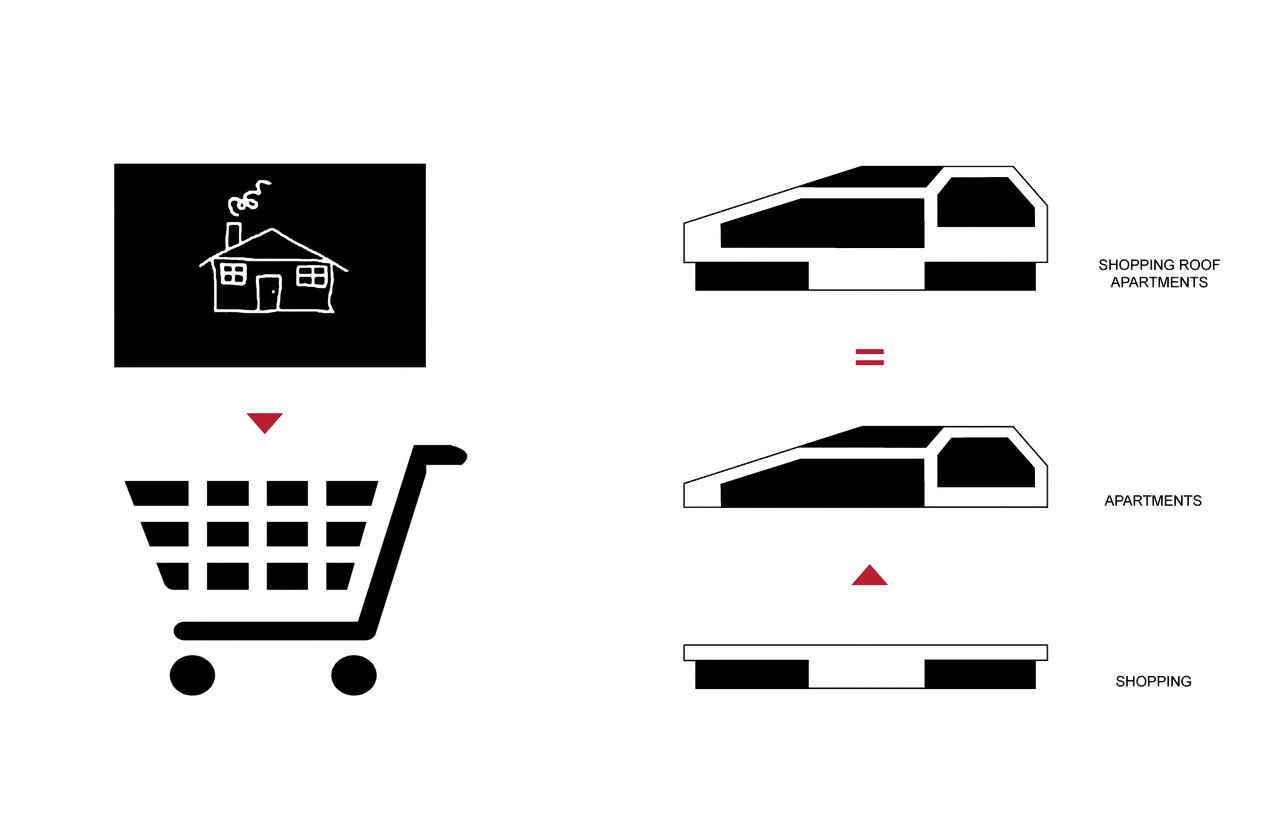 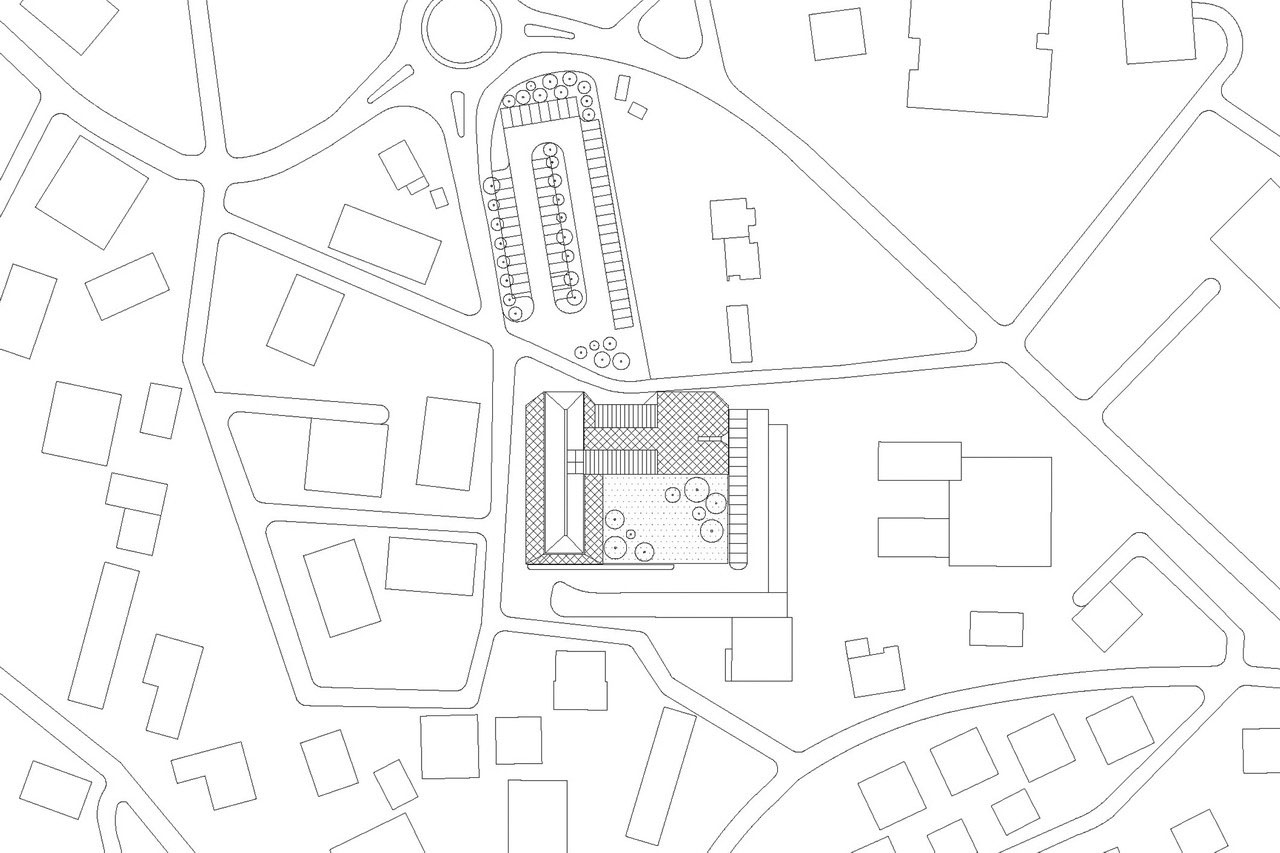 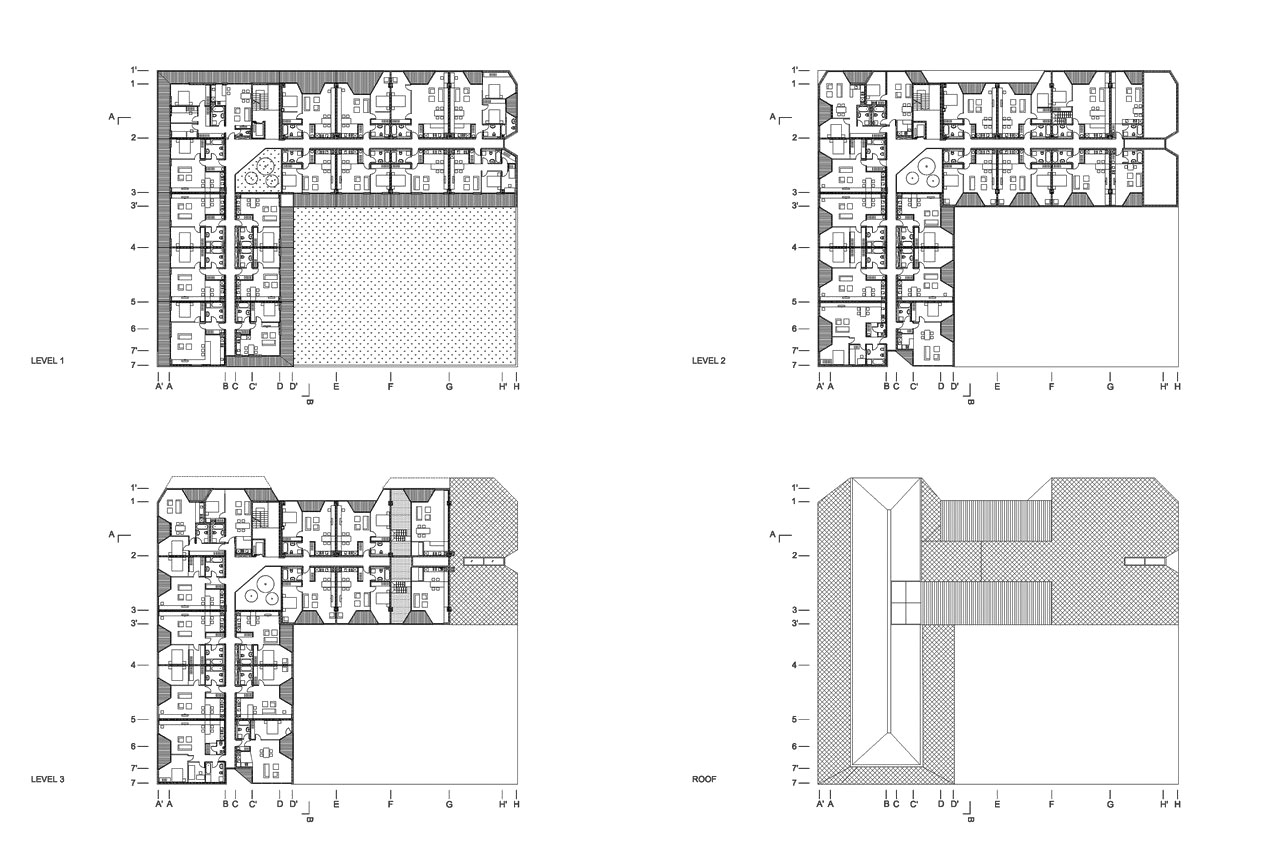 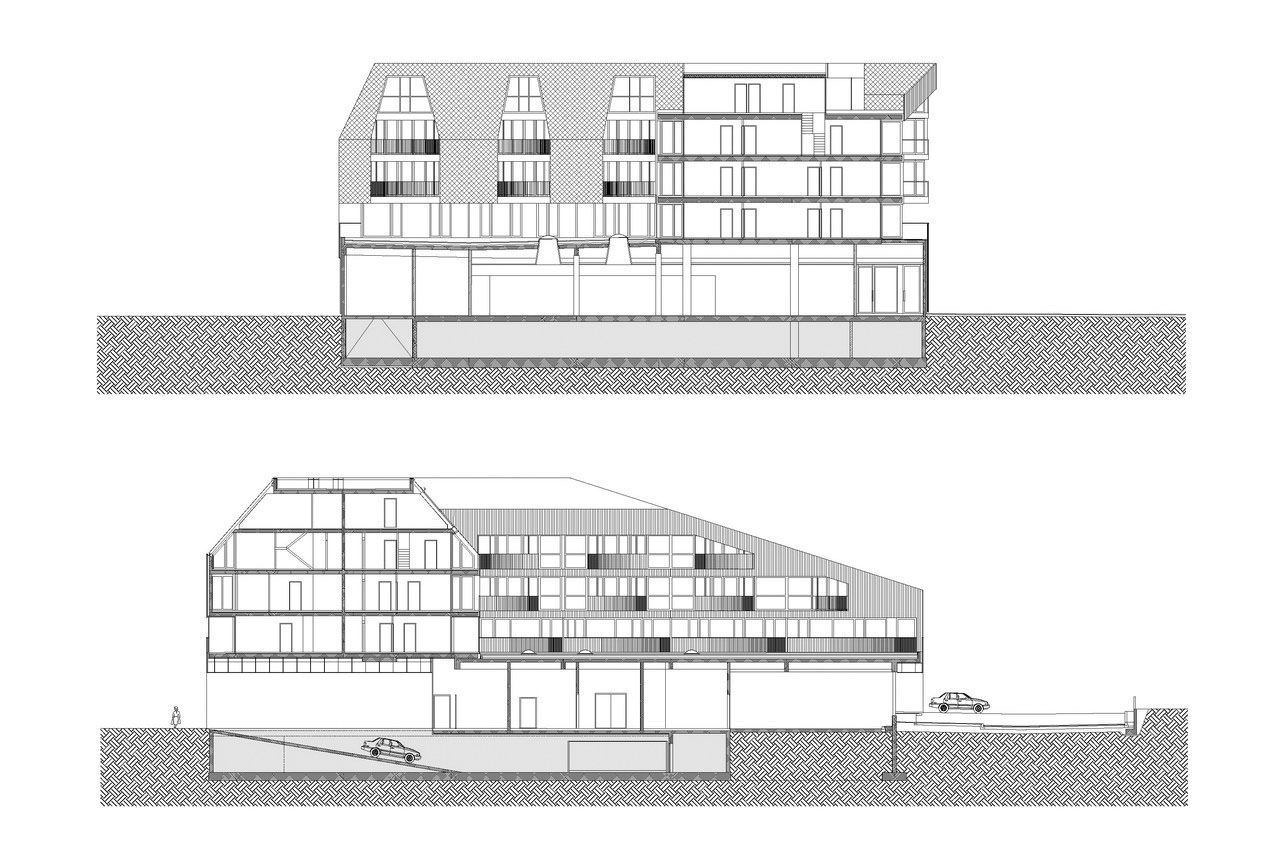 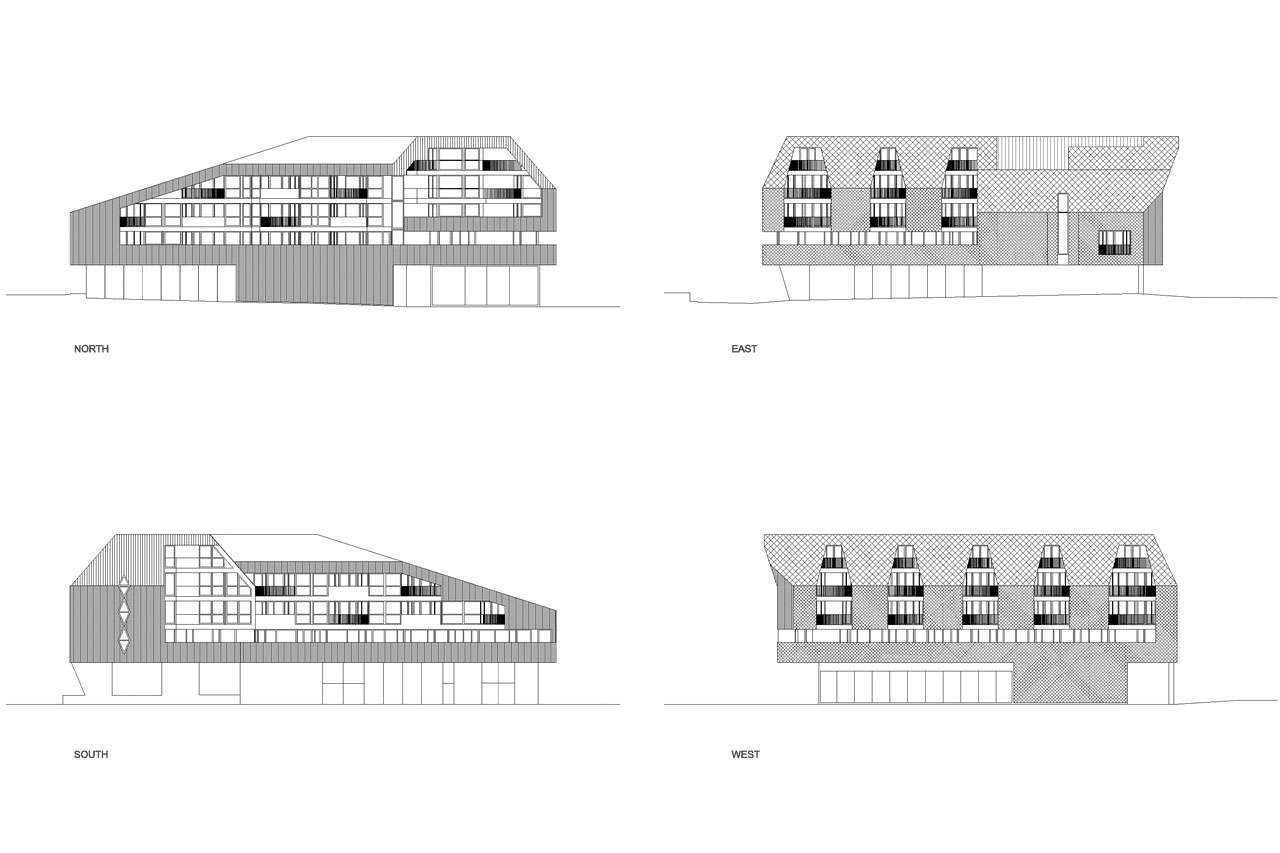